The Institute of the German Prevention Congress (DPT-I) and the Radicalisation Awaress Network (RAN) has offered a series of webinars (online-seminars). Several aspects of radicalisation are explained and discussed. The Webinars were held in English language. You can find a documentation of the webinars below.

For the webinars in german language see the german website.

Webinar#4: The role of communities in prevention of radicalization 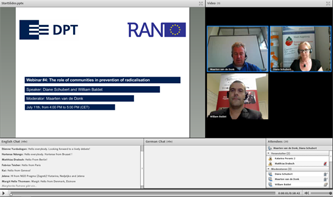 On July 11th from 4 to 5 pm a webinar was held on the role of communities in prevention of radicalization by Deutsche Präventionstag and the Radicalisation Awareness Network.

Engagement with and empowerment of communities are critical in the prevention of radicalisation leading to violent extremism. Communities and families within there can offer support and guidance within the community. Moreover they can play a role in challenging extremist narratives and messages and provide for alternative narratives. When it comes to people at risk of radicalisation, communities can also be a wealth of knowledge and can provide information that could help authorities. Communities need also receive support and be listened to when extremism contributes to grieve, vulnerability and fear.

How are cities dealing with communities when it comes to the delicate subject of radicalisation? That is the topic of our upcoming webinar on 11 July from 4 to 5 pm (Brussels time). Two experts who work on the grass root level will speak about their experiences regarding engaging and working with communities: Diane Schubert from Augsburg (Germany) and William Baldet from Leicester UK.

Webinar#03 The role of community policing in prevention of radicalisation 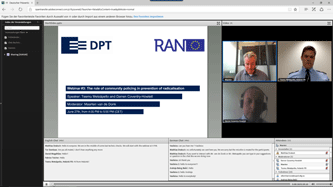 On June 27th from 4 to 5 pm a webinar was held on the role of community policing in prevention of radicalisation by Deutsche Präventionstag and the Radicalisation Awareness Network.

The presence of police in neighborhoods is going beyond gaining information, patrolling and acting in the name of law. Having contact, building partnerships with individuals and communities and stakeholders is key to work jointly on prevention and on joint ownership of safety related issues. This doesn’t apply to ‘ordinary’ criminal issues like shop lifting or street violence. Also for prevention of radicalisation community policing is key. As the first signals of radicalisation tend to be visible on the grass root level local police officers are in the frontline of the phenomenon. A special challenge for community policing in general and even more when it comes to radicalisation is the relationship between the police and vulnerable communities. Often the level of trust in authorities and police is smaller here. With the topic of radicalisation a very sensitive matter is raised which requires a cautious and well thought approach.

The webinar will show examples of community policing dealing with radicalisation throughout Europe. Speaker will be Teemu Metsäpelto, Chief Inspector in Helsinki Police Department, Preventive Policing Unit. He has a strong background of community and preventive policing in the capital of Finland. Preventive Policing Unit was founded 2012 and it has done a broad cooperation with the law enforcement authorities, other authorities, NGOs, associations, multilingual, multicultural and religious communities as well as citizens of Helsinki to enhance the security of the city and to prevent phenomena that are endangering security. In his daily work Metsäpelto has focused on the work with the Muslim communities in Helsinki, as well as the prevention of violent radicalism and extremism, especially in the multilingual and multicultural communities. Currently, Metsäpelto as a project manager, is leading a nationwide preventing policing project. He holds a Master of Social Sciences in Political History, Russian and East European Studies from University of Helsinki.

Webinar#02 Dealing with Radicalisation at Schools

The second webinar was held at the 18th of April 2016 by Jesper Holme and Karin Heremans. Later adolescence and early adulthood are regarded as vulnerable periods for radicalisation processes. For this reason secondary schools can be places where youngsters show worrying signals or even explicit radical behaviour. The present leave of youngsters for IS puts political and societal pressure on the educational systems to deal with radicalisation. How can schools handle this task and meanwhile remain a positive learning environment in which pupils and teachers feel comfortable? What could schools do to build resilience against extremist thoughts?

Jesper Holme (Aarhus, Denmark) will focus on how young people can be themselves and also be part of a greater “We”.  What is the connection between a good balance of personal skills and daily challenges and the motivation to think and say, what you think and mean? And what about the development of critical thinking? Since 2009 Jesper has been a part of the working group “Prevention of Radicalisation and Discrimination in Aarhus”, a cooperation between East Jutlands Police, Social services and the educational system in Aarhus. Jesper is a former teacher and pedagogical leader, and he is now working for the development of the educational system and as mentor consultant under the “Aarhus model”.

Karin Heremans (Antwerp, Belgium)  tells how she got involved in the topic when youngsters of her school radicalised. As there was no support at that time she developed her own programme on dealing with radicalised pupils and offering them new perspectives. Apart from being director of a secondary school, this year Karin started as an expert and policy advisor on radicalisation at GO!, one of the leading Flemish educational networks. She is one of the two chairmen of the Education Working Group of the Radicalisation Awareness Network. She published several articles on the subject, most recently ‘Onderwijs in tijden van onmacht’ (Education in times of powerlessness), released in ‘Lokroep van IS’ (The lure of IS) edited by P. Loobuyck. 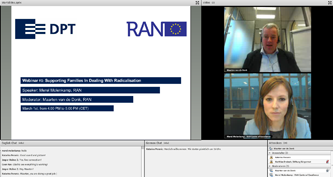 Presentation of the Webinar

The first Webinar was held on the 1st of March 2016 by Merel Molenkamp, Consultant Radar Advies. Within the RAN Merel is part of Secretariat which supports the RAN as a whole and RAN Working Groups. Besides she is involved in different projects focused at the public and social domain and emphasis on prevent work like a pilot project to creat labour opportunities for people with a labour disability. She is also involved in strategic advice to EU Member States.

Families can be key actors in the prevention of radicalisation, can act as important agents of change and can provide enormous support structures for radicalised individuals. Family support can take place at different stages and can be provided at the first signs of growing extremism, while an individual is engaged in extremist activities or when the individual is engaging in a rehabilitation or reintegration program. This webinar discusses on some the lessons learned and best practices regarding family support.