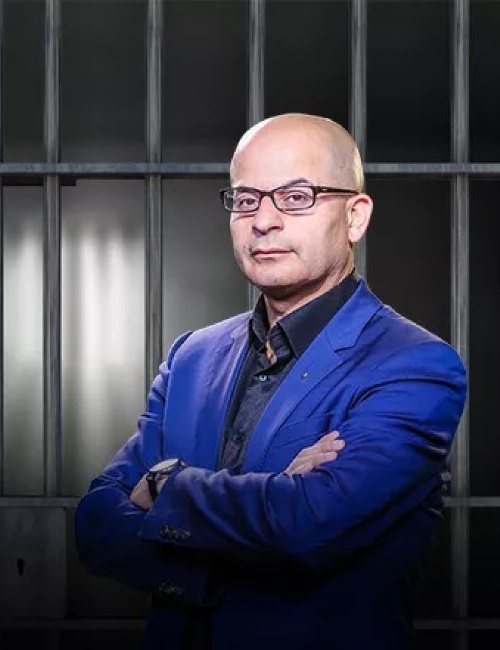 Rachid El Mounacifi is born in 1966 in Morocco of a mother house wife and a father a policeman (first group 1956 in Morocco) who died of work depression and left Rachid 7 years, two other brothers, a sister and the mother with a pension of 36 euros until today.

As 19 years old, he left the country for a better life, illegally starting from Spain (Ibiza) where he quickly could see that the party life will not achieve his dreams specially he got a family in Morocco waiting for his help. From Ibiza, he left to Sweden where he lives until today. Rachid is a Dr in criminology (specialize in youth delinquency and radicalization), victimology, psychoanalyst, hypno-therapist, security expert and a writer. Swedish nationality.

To make his way out, he started as a cleaner, street fighter to make money, to the hotel industry to pay for his studies, then in security, interpretation, Immigration Ministry, Stockholm Court, Police Headquarters and the Swedish Parliament, these are some of the professions that he made.

He works between Europe, the Maghreb and the rest of the world on these new types of delinquencies that bother the world. Awarded by the golden Eagle in Spain and the golden Gun in the US.

He is the author of several books (Tribute to an Angel, guide to private security, Crimes &Tchermil and the last and 10th book about radicalization, our trapped Children.

Rachid works for the Swedish police and The Swedish National Board of Institutional Care and is a lecturer in many Universities around the Globe. Soon he will start his own Peace organization, trying to change peoples mentalities and start respecting and tolerating each other no matter our differences.

Crime prevention in public spaces
DPT-News
Memorandum 2021
today:
Web conference series on the local roots and impacts of organised crime
Efus coordinates a working group on organised crime since 2019, led by the Cities of Amsterdam and Rotterdam. The group seeks to adapt local prevention policies to the particular characteristics of more ...
yesterday:
Fight Racism
Every day, each and every one of us can stand up against racial prejudice and disrespectful attitudes. Let’s build a world beyond racism and discrimination, more ...
two days ago:
EUCPN webinar: bullying among minors
Despite bullying being a common phenomenon, the public, schools and governments are often not ful more ...
Sitemap
DPT-Dokumentation
Deutscher Präventionstag
27. DPT
Folge uns auf